The school bus has been our predominant in our thoughts this week with a crash on Tuesday morning! We offer a service out of the town to the outlying village about 2 kilometres away and as the bus was turning to pick the pupils up, a speeding mini bus zoomed along and hit us, causing the bus to spin across the road and hit another vehicle coming the other way ! 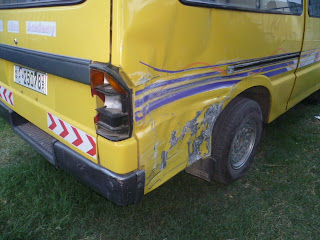 Thankfully no one was injured and all vehicles were able to limp away to the garage. With a crowd of witnesses ( pupils and their parents waiting to get into the bus ) the investigation should have been very straightforward.
However, with the right amount of money, systems can easily be altered, thus it suddenly appeared that our bus was the “ cause “ of the accident, with the original police plan indicating  exactly  where the vehicles had hit suddenly sprouting additional points ! ( in the other vehicles favour of course )
As a result, we are continuously just going round and round in circles – there is no logic or reason to the system. The court case is called for one day and then altered without warning or explanation, the driver is called and threatened with prison and out of court deals  are offered !
This has resulted in great stress and worry for all involved – at the moment it seems that the best case scenario is for the driver to be offered an alternative between 3 months in prison or a 10, 000 birr fine ( £ 360 ) and for us to cover the cost of all three vehicles to be mended ! – although of course, just because this is the scenario at the moment, it isn’t to say that it will be the same tomorrow !