Yet again exam season is underway ! – exams are very popular here, with  all pupils ( including the tiny 3 year olds ! ) having exams in four subjects ( maths , English, Amharic ( the national language ) and science ) four times a year !
However, the great thing about this particular round of exams ( end of first semester ) is that we get a holiday at the end ! – although we have a nice long summer break ( mid July – September ) -  the rest of the year the only holiday is two weeks in February ! This is quite a tough schedule with our active learning method and by now both teachers and pupils are beginning to fade away !
This week another pupil was added to our full sponsorship list and is now eagerly awaiting a sponsor. As one of our children was sick , my husband popped out quite late ( for Nazret ) at about 8.45 pm to get some paracetamol  and was shocked to encounter one of the mothers working on the street as a prostitute. We hadn’t been aware of this, so met up with her the next day to try to assist. She had received an education only up to grade 3 and thus couldn’t read or write at all . This meant that she was always struggling to find work. She had married against her family’s wishes and thus had been disowned. About a year after her child’s birth, the husband simply left with another woman and her family continued to refuse to have anything to do with her.
Desperate, she left the city, hoping that Nazret would offer cheaper accommodation and the possibility of work. However, after a few failed odd jobs, she found herself in a desperate situation – knowing no one in Nazret, no family for support, no money and a small baby to look after. The only solution that she could see was that of prostitution.
In addition to offering a full sponsorship, we are working to get her onto a programme which retrains prostitutes, whilst at the same time, looking for places for possible employment for her.
If you are interested in supporting her daughter ( aged three ) with a full pupil sponsorship then please get in touch at :  stephanddawit@yahoo.co.uk or find out more about a full pupil sponsorship on our website www.englishaliveacademy.org


Don’t forget that there is still time to sponsor Clare – our UK runner ! – with all proceeds going directly to the school  this is a wonderful cause to support !   - see sponsored run   for more details ! 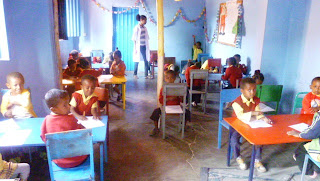