The computers and ukuleles!

Yet again this week has proved to be a very busy one !! Fortunately we had a day’s holiday on Tuesday for Eid so that gave us a little respite ! 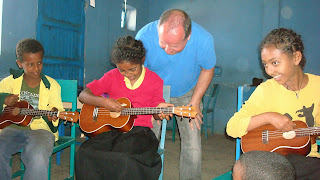 Mike – a volunteer from the UK arrived this week to see the schools in action. A qualified accountant, Mike is interested in helping with organising the financial side of the schools as well as helping with fundraising  ! It was fascinating to see the schools from a different perspective and it was incredibly useful to be able to work with him in planning both short and long term – so hoping for a long and productive relationship with him in the next few years !
He was kind enough to bring along 3 ukuleles, which proved to be a huge success ! We will shortly be forming the first Ukulele club in Ethiopia – I just need to practise how to play so that I can teach the pupils !!
﻿﻿﻿﻿﻿﻿﻿ At the end of the week as we were dropping off Mike at the airport , we popped into  Camara – the Irish organisation that we were working with for the 20 computers . A previous volunteer – Cieran – has worked long and hard organising and raising the funds for the computers and he was as eager as us to get them into the school !  To our surprise upon arrival at Camara, our computers were all ready and waiting for delivery ! As a result we instantly piled the computers into a van and our other volunteer – Amy – is currently in the process of setting them all up ! We can only imagine the pupil’s faces on Monday morning when they arrive to see a fully equipped computer room  !!
The great thing is that the previous five computers can now be transferred over to the new school, Pupils there will never have seen a computer, let alone touched one so they will be learning completely new skills which will give them a very solid foundation for future employment prospects.
Since the new computers have DVD drives, then we will also be able to move across the television and DVD player ( previously donated by a past volunteer – Johanna ) to the new school so that we can show them educational videos. Again, pupils will never have watched a television so that will be another wonderful new experience for them !!!
Can’t wait for next week and see how the pupils all react to all the new and exciting developments !!