This week – well …… not the best in the world really !
The first problem was the weather – in Nazret it is rare for it to rain during the daytime , even during the rainy season. However, we woke up ( late – since we always just rely on the children waking up with the sunshine ) to find it cold ( relatively ) and pouring with rain ! As a result, we had  to scamper around searching for a cardigan and an umbrella ( things which rarely come out ! ) Everyone was thrown with this spell of incredibly unusual weather and of course, the school playground was not ready ! This meant that the whole area turned into a huge swimming pool, puddles in the classrooms from dripping roofs and sections of the ceiling coming away ! The good thing however was that the student turnout that day was very low since when it rains in Nazret , people tend to simply give up on the world and stay indoors ! 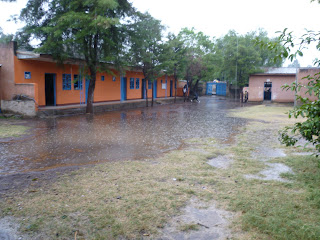 Perhaps the rain had something to do with our next problem  -  the drains in the kindergarten compound. The water had stopped a few weeks ago and the water board had come out and dug in the compound as well as next door which seemed to have alleviated the problem. However, a couple of days ago, all of the toilets suddenly became blocked. We managed to temporarily unblock them, however yesterday they seemed to explode with the water ( and contents ! ) bubbling up !
Fortunately this was almost at the end of the school day, which was just as well since the bubbling became a flood and soon the whole school compound was a massive cess pit ! This coupled with the heat of Nazret (which has now returned ) has meant that the smell is horrendous !  We have a couple of men in working on the problem but school for the kindergarten children has had to be cancelled today – really hope that it can all be sorted out for tomorrow since we have exams next week and the children are supposed to be doing assessment etc ! 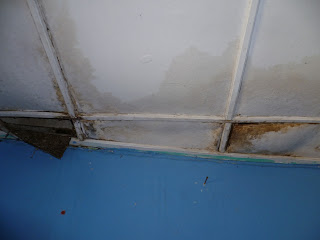 Hoping that next week will be better !