THANK YOU DUNCAN AND SARA!!


At long last a little period of semi rest now that the summer school has finished. The summer school as a whole went really well, despite there being 2 rather than the needed 3 volunteers due to visa difficulties. However, Duncan and Sara just made the best of the situation and got on with it, thinking of new and fascinating ways to teach a wide range of interests and abilities with very limited supplies.
The teachers really appreciated their input, with it being great to have the experience of different techniques and approaches – all of which reiterate the fact that rote learning and copying from the board isn’t the way forward – which is great reinforcement since however much we train them and tell them and support them, since this is the training and experience that they have had, then inevitably that is the system that they slip back into. Yet, with more and more reinforcement and exposure, it is hoped that confidence will be boosted!
Now that the children and teachers are resting, it is time to race on full ahead with preparing the school for the new school year which starts on about the 16th September after the Ethiopian new year on the 11th September. 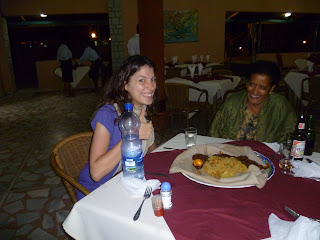 The main thing to do is to sort out the tables and chairs. Although some of them have been repaired thus far, it was a case of working around the children. For many of the chairs it is a simple case of re fixing the chair backs which seem to fall off quite readily. We anticipate however, a severe lack of tables for the New Year since the grade 4 class which just left consisted of 9 students only. The grade 3 class coming up consists of 26 which means that new tables and chairs are required. The great thing is that we have had donations for the repairs and this has given us huge assistance for our aim of getting one chair and a space at a table for all pupils on the very first day of school!
The tax is the other huge job at the moment. The government seem to be a little short of money this year so have dramatically increased taxes which bear no relationship to the amount of income, with small shops which have an income of about 100 pounds a month being charged a thousand pounds in tax and thus being forced to close and sell their items simply to pay the bill! As usual, we are in the negative when it comes to profit. This is something that the government simply cannot understand, not believing that we are running the school to provide a service for the community not to make money, meaning that they charge us what they think we have made! It doesn’t matter how carefully we keep records throughout the year, showing them receipts for everything purchased and the receipts from the parents that have paid school fees, they simply disregard it all and make up a number! We are hoping against hope that the number they make up this year is a low one and the tax is reasonable – but it is very worrying! 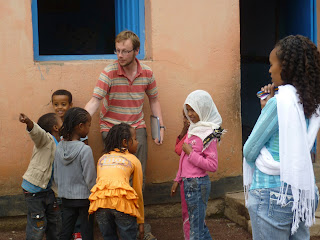 On a personal front, we are having a bit of a problem since we had planned to move into Dawits mother’s house in Nazareth as a starting point. Since we will have no income when we move to Nazareth, then we are working on a very tight budget. We are hoping that there will be enough money this year at the school for us both to be paid a minimal wage so that we can keep going, but until we know the student numbers in September when school starts and then receive the first month of payments we will have nothing! As a result, we planned to temporarily move into the house and for Dawits mother to move into the room at the bottom of the garden.
Dawit was half way through putting in a ceiling at the room at the bottom of the garden when the owner of the house came round and told them that the house was to be sold and that we need to be out after 30 days!
We had a good cheap rent on the house and it was a 2 minute walk from the school and was perfect for us all! It is the house where the children first took their first steps and where Dawit and I started our married life – it holds a lot of wonderful memories and although it is only bricks and mortar (well – mud actually!) I was attached to it!
This means that we need to find something else which will inevitably cost at least twice as much , not really knowing where it will be ( since we do need to stay in a convenient location since the house is used for the volunteers ) and then there will be costs of painting the house etc  when we move in ! The chances of finding something where there is a separate area where Dawits mother can live is minimal, which means that we will all have to live together in one house for now ! Although Dawits mother is wonderful, it is not the best thing for a family to live with a mother in law –however nice they are!
Still, I suppose these things come to try us! – Long for a nice smooth period where there don’t seem to be any disasters and things just tick along nicely! – Perhaps next Ethiopian New Year – so roll on Ethiopian year 2004!